Smartphone apps apparently have no limit for any category. You may find apps almost for anything – from education to health, business, travelling, religion etc in app stores. In this article, we are going to list top apps related to how to boil eggs?

Smartphones are “smart” for some reason and they are also smart when it comes to boiling eggs. Whether you are using iOS or android or some other smartphone, you may find apps related to egg timer that will take you through egg boiling process from beginning to your desired level. Not only it will let you know time-based egg boiling level but also what the probable shape of the egg is inside, or how much egg is boiled inside (feature varies from app to app). So here you go with the list of free apps.

The egg timer is a free app that guides you how to boil eggs for different levels. The app works on the scientific research basis for calculating the boiling time and lets you know as it reaches your desired level: hard boiled or soft boiled egg. 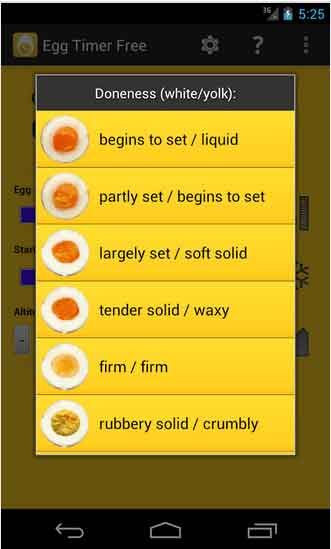 The app needs permission for location information as it will automatically take boiling point based at altitude since sea level and higher altitude has different boiling points.

The app requires you to put the egg in already boiled water at the beginning. Also, the egg must be fully occupied by water.  You will be updated at notification bar with the current boiling level of the egg.

This is an ad based app, as such, it’s a free app so also asks for full internet access. To remove the ads, you can go for paid version of the app.

The egg timer app is downloaded and installed over 100K times with 4.2 ratings in google play which makes it worth trying for better egg boiling experience!

With 4.4 rating in android apps market (Google play) and over 50,000 installations, the CookEgg timer app tells the time required to boil an egg. This is based on chicken egg weight that you will specify and then desired level – boiled egg, soft or medium boiled, the app will calculate required time. 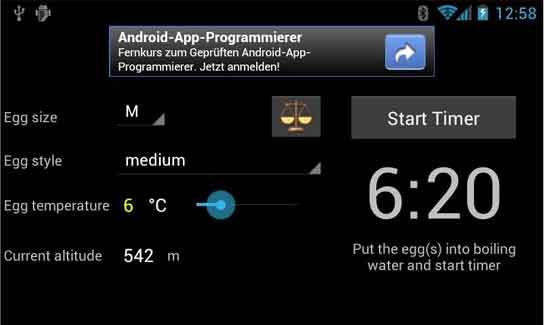 The boiling point is derived from network localization. You have to put the egg in boiling water for the accurate result.

My perfect egg timer free app takes egg diameter, desired boiling and altitude (for boiling point of your location) and it calculates the time requires to reach that state of the egg. 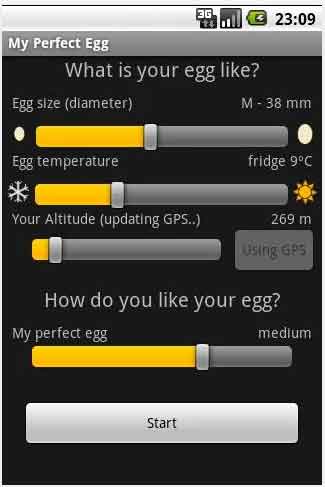 Once the egg is reached at the desired state – hard boiled or soft, the app will notify just before that point. You can measure the egg by using Pro version of this app.

This app has been downloaded between 100Ks to 500Ks in google play store while it has good ratings of 4.0 as we are writing about it.

The perfect egg timer app will not only calculate the time to boil eggs to your desired level but also will show the graphical view of what is going inside the egg during the boiling process. The other features like how long to boil eggs for perfect hard and soft levels by using egg measurement, egg temperature (room or freezer) and altitude also included. 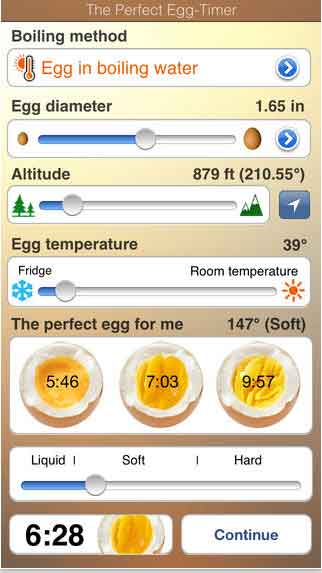 The measurement of the egg is done physically by placing egg over your smartphone and using the fingertip to get the size in inches or millimeter. For boiling point, you can set the altitude manually or by using GPS to let app determine it.

How to Boil Eggs – free app

The app, How To Boil Eggs is a free app that has egg recipes and tips related to how to hard boil eggs, how to make soft boil eggs and other egg recipes like deviled eggs, scrambled eggs, poached egg tips, Iowa eggs, egg salad and many more. 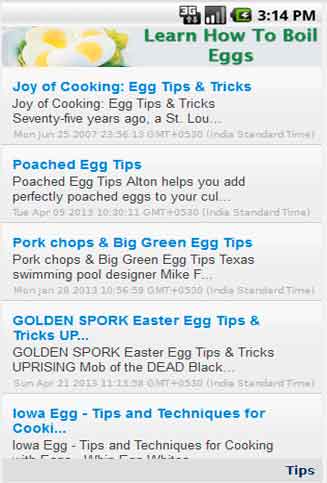 This is a relatively new app with quite a low number of downloads. But, as it is related to egg recipes and tips unlike the above-mentioned egg boiling apps we have included this in our list.

Update: This app has been removed from the Google play!